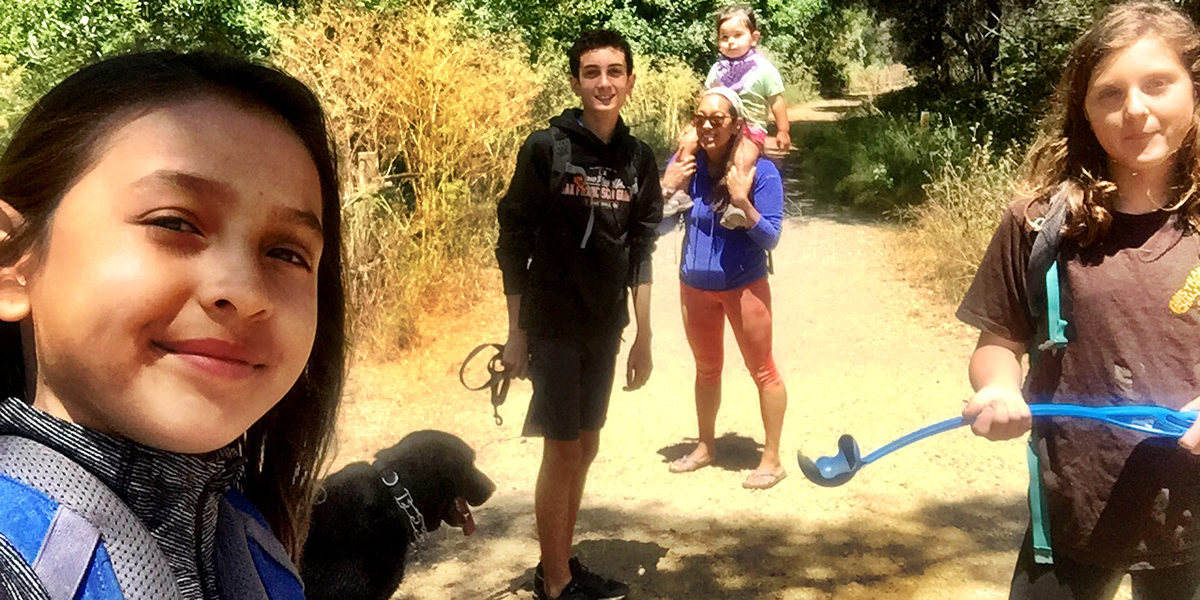 Tech To Trails: Why It’s Ok To Bring It Outside

If you haven’t experienced the Pokemon phenomenon (say that 3x), then you either don’t care at all, or you’re trying really hard not to download it because: Bandwagon. While I am an advocate for playing video games, I can see how gaming on phones is hard for kids to manage. This is a challenge for our big kids and even us sometimes–and I think we get outdoors pretty often.  If you find yourself in a cloud of guilt trying to figure out if your kids will turn into zombies, then you can take comfort knowing there’s light at the end of the next Poke Stop.

Set a time limit for cell phone games. We get outside regularly and once my big kids downloaded PokeMon Go on their cell phones, I noticed they wanted to play it every time we left the house. At first I was apprehensive about this. How can you not be if you’re a parent? At the same time, setting a time limit allows us to tell our kids it’s ok play their game but only for little while. It sets boundaries for them and assures us as parents that they won’t be playing on them all day.

Find a new activity to do when you’re outside. In the midst of Pokemon Go fever, instead of our normal hike that we usually do most days, we decided to climb down into the canyon to a little creek area. We explored and challenged ourselves to get down this pretty steep slope to reach it. Once we did, it was all new territory. Then we had to figure out how to get back up the slope we came from. Finding new activities to do or even taking a trail less hiked is a way to learn new things and challenge ourselves and our kids. Whatever the activity is, kids will remember and bring it up later.

Find a balance. Like coffee or sweets, we try to find a balance between enjoying them and knowing when we are taking advantage of them. There are days when our big kids abuse their cell phone. But we remind ourselves that we do other things with them. A lot of other things. There’s even times when we’ve immersed our kids with being outdoors so much that they tell us they don’t want to hike and they just want to chill. We’ve allowed them to bring their cell phones on hikes so they can take photos. But either way, we do our best at finding that balance between technology and the outdoors while having fun in the process.

Bring friends along. When you’re playing outside with friends, it’s always more fun. At least that is how I see my kids interacting when cousins or friends are with us. They all get together and find ways to explore and trees to climb, and share stories with one another. If there is game time set aside when you’re outdoors, I also find it easier to enforce time limits because once one puts their cell phone away, the others follow behind.

Realize that games like PokeMon Go can be a good thing. They could be sitting at home in the same spot for hours. Thank you developers for making it about moving outside to catch them all. The National Park Service released a video voicing their support of playing PokeMon Go while visiting parks. There were a few mentioned precautions, but ones I felt were very reasonable–like being sure to pay attention to your surroundings so you don’t fall. I also love that the message reminded us that while our kids (and maybe even some parents) are catching virtual creatures, that we stop and enjoy what’s around us. Overall, it was a message that as a parent I needed to hear and my kids needed to hear too.

How do you feel about the Pokemon phenom or other games and do you allow your child to play them while you’re outdoors? If so, what are some of the challenges you’ve been faced with?

We Got A Liebster Award!